History of our Parish

Sacred Heart Parish was established in 1922 by the Stigmatine Fathers. Of the 32,000 people residing in Waltham at that time, about 4,000 were of Italian descent. The majority of the city's population was Protestant - New England Yankees, Swedish, German, etc. - while the largest part of the Catholic population was Irish. Two churches served the Irish population, St. Mary's and St. Charles', with the Charles River serving as the parish boundaries. There was also a church for French Catholics, St. Joseph's.

While there was no church for the Italian people, an active church committee, under the lead of Salvatore Trapanese, had been in operation for eight years.

The Italian population was not completely homogenous, but some 80 percent were members of the Sicilian-Eolean group, with the other 20 per cent coming from Calabria, Abruzzi, and Campania. Other areas of Italy were poorly represented, if at all.

Our forefathers, on their arrival in this country, were blessed with the assistance of their kinsmen and friends from their former home towns. Some families played host to hundreds of paisani in the course of the immigration years, and through their generosity gained great power and prestige among their countrymen.

It was decided by William Cardinal O'Connell, Archbishop of Boston, that an Italian priest should be located to establish a church for the community. Cardinal O'Connell asked Father Baxter, then pastor of St. Mary's to find a suitable pastor.

The first two priests to serve Sacred Heart were Father Raymond Dalla Porta, C.P.S., founder and first pastor, and co-founder and first assistant was Father William Ludessi, C.P.S. The Stigmatine Fathers were entrusted with the spiritual care of the Italian people in the Waltham area.

The old church building, the free use of which was given by The Boston Manufacturing Company, who employed many Italian immigrants, was located at the corner of River and Jackson Streets. The church had a sacristy, but there were no vestments, no church equipment, no altar stone or altar, no confessionals, no stations of the cross and no statues.

The Sisters of Notre Dame de Namur came to the aid of the fledgling parish and donated an altar, chalice, vestments, and other materials necessary for the celebration of Mass. A few days later, on November 27, 1922, Father Baxter donated a larger altar.

Fathers Dalla Porta and Ludessi took up residence in Lynn, and from there the two priests made the necessary contacts and laid the groundwork for the parish. Although no documents can be found, it is known that the parish was entrusted to the Stigmatine Fathers on November 6, 1922.

In April of 1924, Father Dalla Porta obtained permission to buy a tract of land for a new church and rectory. A plot at the corner of River and Newton Streets was purchased on July 3 of that year. The new church was completed in time for Midnight Mass in December, 1924. The new church seated about 360 people. The basement, with a capacity of 350, was dug out and made ready for use on July 16, 1925. This building now houses the CCD classrooms and the church hall which is used for many events throughout the year. Additional lots were purchased for the parish on October 29, 1925.

The year 1927 saw the parish receive permission to build a rectory for the pastor and his assistants, which is still in use today. The construction of the rectory ran afoul of labor problems but they were soon ironed out and the building was completed on July 1.

The Building of the New Church


In September 1958, Father Stephen Dalla Via, pastor of Sacred Heart Church, asked Aldo A. Minotti, prominent Waltham architect, if he would be interested in designing a new church for the parish. Mr. Minotti gratefully accepted the honor, and was soon hard at work undertaking the task outlined for him. He was given free rein to apply his own inventiveness and imagination.

The church was to seat about 900 parishioners and was to be located on the land adjoining the parish rectory. The style was not to be bound by popular tradition, not to be merely modern - it was to be a glimpse into the future. The nature of Waltham itself, an energetic, modern industrial city with a heavy concentration of electronics work, was to be reflected in the church. Four contemporary materials were to be used: glass, concrete, steel and aluminum. These restrictions were made so that the structure would require little maintenance.

The dominating theme of the architecture - the Unity of Faith - necessitated the removal of side altars, candles, and saints' statues from the nave, and the concentration of all lines and motifs toward the altar. Nothing in the design would serve to distract the devout communicant from the Mass and its meaning.

The floor plan of the church is oriented from east to west, according to Church tradition. The main entrance is to the west. The nave itself is a parabola in form, the design bringing our attention to direct focus on the beautiful altar. The ambulatory surrounding the rear of the Sanctuary connects the north and south porticos, and leads to the chapels of the Holy Eucharist and the Blessed Mother. 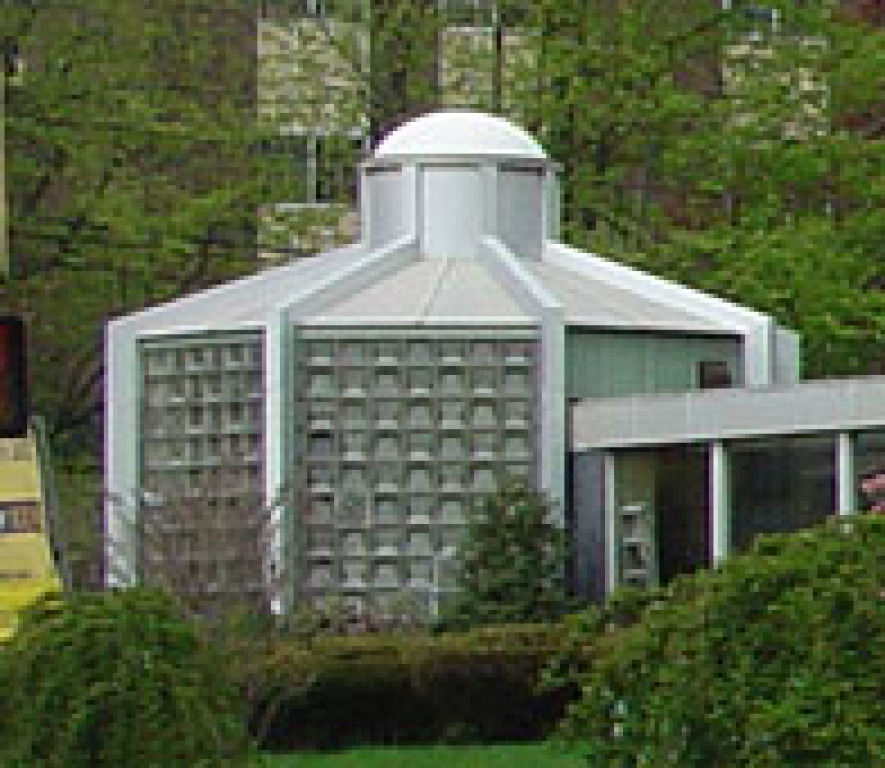 The narthex is our introduction to the church and serves as both vestibule and corridor. It leads into the impressive Baptistry, which is placed in the northwest corner, separate from the church. Baptisms are now performed adjacent to the altar and the original Baptistry is now the candle room. The southeast corner houses a beautiful statue of Saint Francis of Assisi.

The design of the superstructure was a result of the architect's desire to express devotional aspirations. The resultant shape of the Sacred Heart Church removes all structures from the line of sight, affording an uncluttered view of the altar for all. The great steel arches are braced with cross-ties and purlins to form an extremely lightweight fabric, weighing eleven pounds per-square-foot. The height is 65 feet, with a base of 85 feet. The exterior is covered with anodized aluminum one-sixteenth of an inch thick. The outside of the walls is formed by interlocking panes three feet by nine feet. They are completely weather-tight and expand and contract within themselves.

The focal point of the church is the altar, depicted as two large hands made of cast bronze, supporting a single slab of Pietrasanra Dorata marble, eleven feet by four feet. Above the altar the large Trinity window with the Lamb Triumphant symbolizes mankind's eternal hope for salvation. 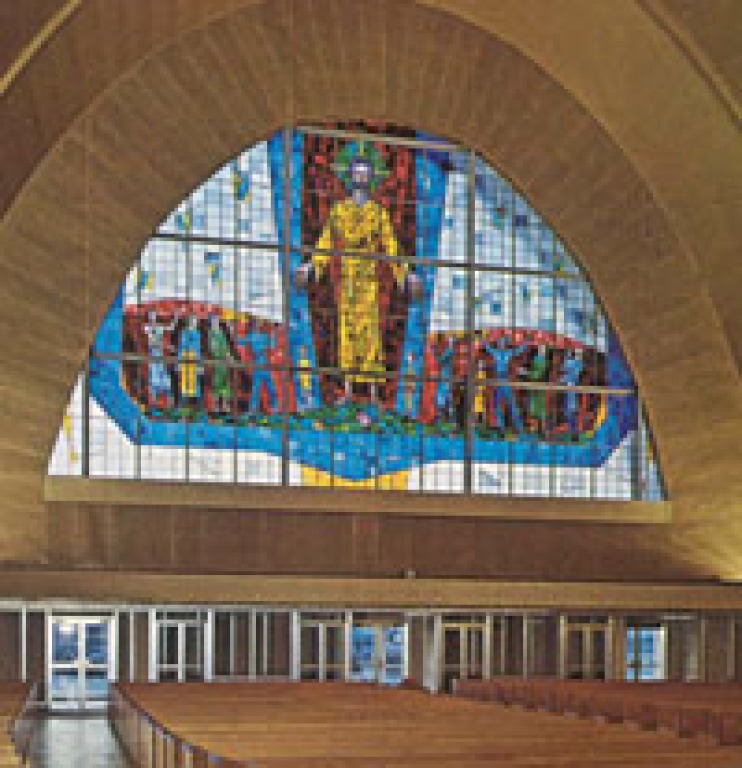 The title of a church always has deep significance and must be reflected in some phase of the architecture. Mr. Minotti has given the meaning of the Sacred Heart a special position and importance in stained glass in the main west window of our church. Christ stands among his people, from all nations, pursuits and ages, welcoming all to eternal salvation through His sacrifice for us.

The Sacred Heart Church is an outstandingly beautiful structure, dedicated in 1964, a glowing tribute to the dedicated efforts of our parishioners, who labored with pride and diligence, who donated freely of their time and energies and finances. Above all, it is a majestic tribute to Our Lord, whose continuing presence in the Tabernacle makes us constantly aware of the bountiful gifts bestowed on our parish through its many years of struggle and triumph, heartache and happiness. 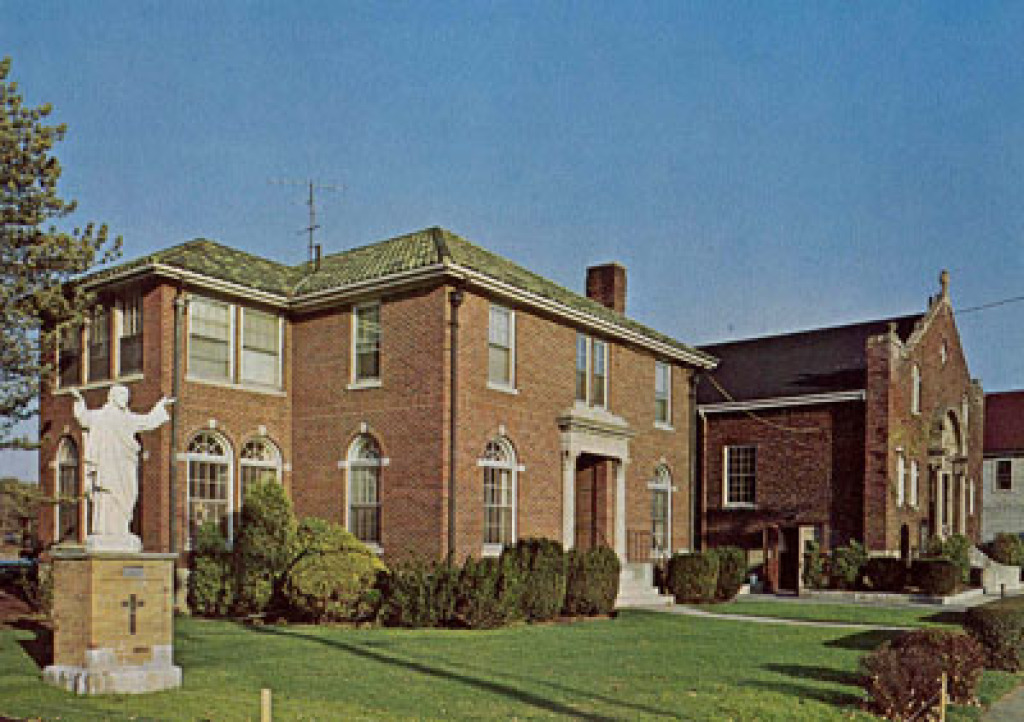 The rectory and the old church. 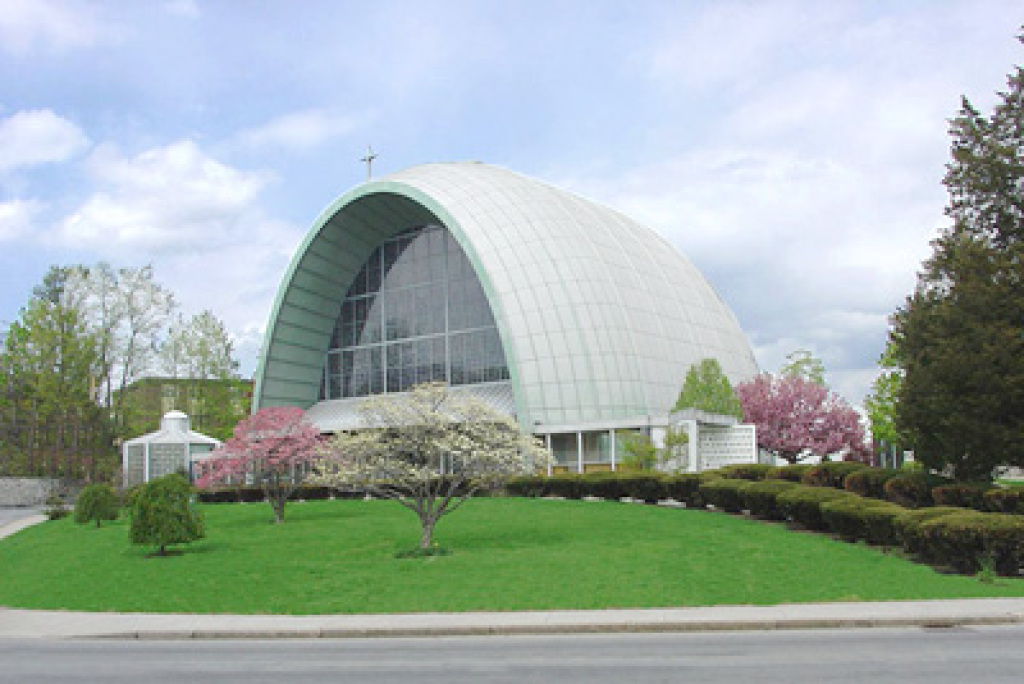