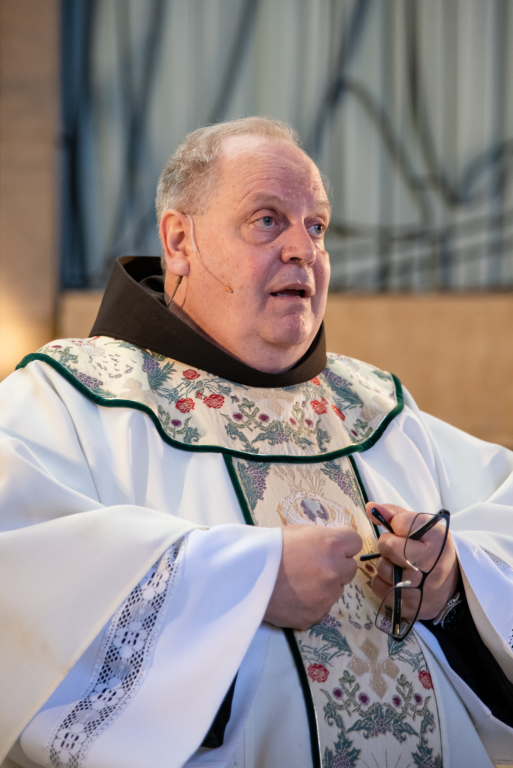 A member of the Province of the Immaculate Conception, Friars Minor, Father Dennis was a native of Long Island, NY.  Throughout his priestly vocation he served in education, teaching at Columbus High School in Boston's North End and at Marian High School in Framingham MA. He also served in retreat ministry and served as parochial vicar in parishes in Swampscott and Marlborough MA before becoming pastor of Sacred Heart.

Father Dennis came to our parish in July of 1999 which began his 22-year journey as Pastor of Sacred Heart Church. To say that he left a mark is an understatement. During his time here, Fr. Dennis established and supported our LIFE TEEN Youth Ministry and as a result has helped to lead hundreds of teens closer to Christ. He welcomed both a Knights of Columbus Council and a women’s group, The Society of St. Clare, as well as supported our parish food pantry. Each of these working to provide for the needs of others within the parish and in the community at large.

To his staff, ministry leaders and volunteers he was quick to respond with “no, I don’t want any, Dennis doesn’t live here” when any of us would present a new idea, activity, or event for the parish, but it was always followed with his chuckle, his throwing his hands up and his saying, “do what you need to do.” He supported anything that would bring our parish family together in faith and community.

Each week he could found bantering with members of the parish family as they entered and exited the church often teasing them about their Boston teams although we all know he secretly cheered them on when nobody was looking. During Red Sox vs. Yankees weekends, it became tradition when he would pull his Yankees cap out from under robes during the recessional so he could wear it outside as he greeted each of us on our way out.

His love for the children he served was evident in the exchanges he had with them during his very animated Sunday homilies. Even when those homilies went terribly awry, much to the pleasure of the rest of the congregation, our children gained so much from the faith he shared so freely.

Always ready for a party, he was often the first one seated at parish events including BBQs, meat raffles, pasta dinners, Christmas fairs, sock hops, sporting events, bus trips. He was a frequent visitor to our youth group campfires and the biggest promoter of our summer Sundae Sundays where he loved to catch up and joke.

In his priestly ministry he relished in performing the Sacraments of the church within the parish community: journeying with RCIA candidates and welcoming them in baptism at Easter, witnessing the marriages and baptisms of those who became longtime friends, and bringing the sacrament of reconciliation to our little ones for the first time. He proudly presided over every First Communion eager to bring Jesus to our children and presented with great pride our Confirmation candidates to every visiting Bishop. He was equally honored when called upon by The Marist Missionary Sisters to help them celebrate their Jubilees and enjoyed all the times he spent with them.

In other prayerful times, his most cherished activities included leading the Children’s Stations of the Cross and supporting our teens as they presented the Living Stations. He also loved looking on as our little ones presented the living nativity each Christmas, but eagerly awaited the end when he could scoop up that years’ baby Jesus to show them off to the parish and plant one of his signature kisses on their cheek before handing them back to their parents.

In the greater Waltham community, he as was a highly regarded clergyman participating in municipal inaugurations and instrumental in assisting local councilors in projects such as the Connors Pool and The Mary Early Footbridge. Nobody will ever forget when he was invited to bless the opening of the community pool and upon finishing his blessing dove into the pool, his habit and all.

He touched the Waltham community and the families of this parish in more ways than he will ever know, and we are all more faithful, kind, and humble for having had him in our lives.

Always in our hearts, the Sacred Heart Community